Christmas weekend is supposed to be a time of peace and joy. But there was none of that for investors in cryptocurrency markets as it reversed course from a modest recovery yesterday.

After falling by slightly more than 40 percent in 5 days, bitcoin reached a high of $15,479.26 yesterday. But the rally was short lived. At 20:28 UTC, it was trading at $13,151.92, down 9.6% from its price 24 hours ago. Other cryptocurrencies were in the red as well. Bitcoin Cash and IOTA, both of which had registered significant gains in the last week, were the biggest losers among the top 10 most-traded cryptocurrencies, falling by 18.78% and 18.24% as of this writing. (See also: Coinbase Investigates Possible Bitcoin Cash Insider Trading). Ripple, another digital currency which racked up increases in the last week, also has shed 14.74% from its price 24 hours ago. (See also: Ripple Is Back. Here’s Why). But its price was still trending above $1, a mark it crossed last week. On an overall basis, the cryptocurrency market was worth $509.8 billion at 20:34 UTC. On the back of its recovery, the market had reached a high of $599.7 billion yesterday.  On Friday, it tumbled to valuations as low as $432 billion.

A variety of reasons have been put forth to explain the bitcoin sell-off.

According to some, the sell-off is simply traders booking profits at the end of the year. If this is the reason, then they must have made a tidy profit. The cryptocurrency market has had a phenomenal year with a valuation increase from $17 billion at the start of the year to more than $600 billion towards its end.

Others posit that warning statements by governments around the world about the dangers of investing in bitcoin and negative assessments by research firms may have prompted fear among investors and triggered the slide. For example, investment bank Morgan Stanley recently came out with a report that attempted to put a price on bitcoin. Because the cryptocurrency is not used as a payment network or as a store of value, the report concluded that its price might be zero.

Still others say the pullback is a natural after-effect of bitcoin’s projectile increase in recent weeks. Its price has rapidly set new records within the past month, even flirting with the $20,000 mark. Iqbal Gandham, managing director at eToro, told Bloomberg that he hasn’t seen a rush to sell bitcoin. “People expected a pullback, especially before the holidays,” he said.

A Time To Invest?

The dip may have given new investors pause before taking a decision. But they haven’t affected Wall Street’s decision to invest in bitcoin futures. Institutional investors are still buying futures contracts despite the fall. (See also: Hedge Funds Reap Spectacular Returns From Cryptocurrencies) 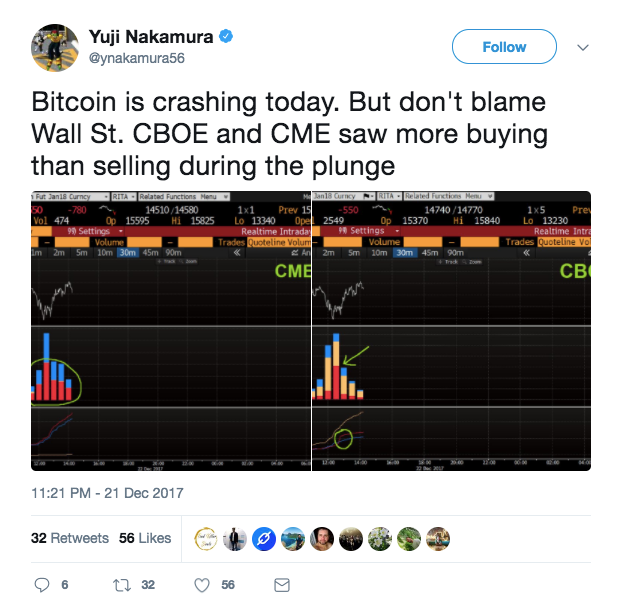 Bitcoin futures contracts expiring in January, which is the most-traded derivative, closed at $13,960 and $14,135 at close on trading in CBOE and CME respectively.

Billionaire investor Mike Novogratz, who has over 30 percent of his net assets in cryptocurrencies, tweeted that bull market isn’t over, it’s just pausing. According to him, the market will consolidate between $10,000 and $16,000 “for a while”. Yet others are viewing the slide as an opportunity to bolster investment before the next rally.

Looks to me like a short term top is in. My hunch is we consolidate between 10-16k for a while. Extreme would be 8k. Bull market isn’t over. Just pausing.

“As the meme says, ‘if you can’t handle my 25% plunges, you don’t deserve my 10x return”,” David Mondrus, CEO of Trive, a blockchain research firm, told Bloomberg.

What’s Holding Back Bitcoin in Venezuela? This Group Is Investigating – CoinDesk

Francis Pouliot separates Bitcoin from blockchain – The Next Web

Bitcoin birthday boy is an absurd star of a serious industry

The State of Bitcoin Mining: Legal Regulations Around the World